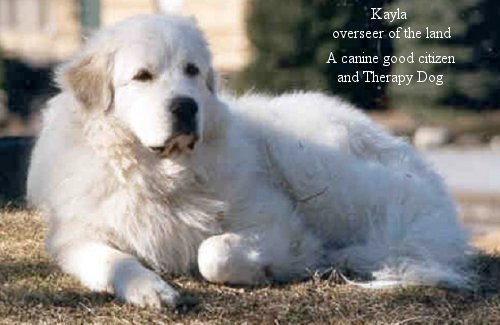 Miss Kayla, as she was affectionately called, was born in the cold snow.  As a newborn, she lived outside in a steel-fenced dog pen on the side of a mountain in Little Gap.  Kayla came from a “bad breeder,” who sold puppies for money when the dogs were not “health guaranteed.”  Kayla came to Kathryn and Ben with a deformed pad on her left hind leg.  It was through multiple examinations and x-rays that revealed that Kayla had the worst hip of about of 65 other Pyr’s examined at the University of Pennsylvania.

Kayla’s mom and dad took the “bad breeder” to court.  Kayla was declared a “legal lemon” and was allowed to live at The Gress Mountain Ranch, with her human and animal family. Kayla did just that and 200% more! She had a Total hip replacement had a young age which took her through her 14 years.
Miss Kayla managed to overcome her physical handicap and go about her important work.  As with all Great Pyrenees dogs, Kayla’s purpose in life was to guard livestock.  It’s what they do; keeping animals safe from bears and wolves. However, one of Kayla’s most significant attributes was a as a “therapy” dog, (a Canine Good Citizen).  Kayla was oh so sweet, kind, and beautiful inside and outside.

Kayla took her job very seriously.  As a young adult dog, she didn’t let hip dysplasia or loose laxity hold her back.  Even the deformed pad that made walking difficult never got in Kayla’s way.  She roamed among the alpacas at The Gress Mountain Ranch, and they loved her.  She watched over us all and kept the goats company.   And even though she outweighed most of them by 97 pounds, Kayla even gently monitored the rabbits’ and guinea pigs’ activities.

LeRoy Piggy, the pot-bellied pig probably owes his life to Kayla’s fast response in a dangerous situation.  The pig was outside enjoying a pear, oblivious to the young Rocky, the other Great Pyrenees dog who had an unknown food aggression problem.  Rocky who wanted to eat food, broke his lead and was hurling toward LeRoy to eat the pear.  Kathryn Gress, Ranch owner and animal trainer, was feeding the horses, too far away to intervene in time.  But she saw what was going to happen and yelled to Kayla, “Save the pig!”  In spite of never hearing this command before, Kayla jumped into action and threw herself at the larger and now threatening Rocky.  LeRoy Piggy and Kathryn are forever grateful.

Kayla saved the day in another pig-related episode.  As a baby pig, Pearl Piggy, was freely wandering in the yard.  A huge and hungry hawk was considering this little pig for lunch.  Kathryn observed the bird circling above.  As it began to swoop down toward the piglet, Kathryn shouted, “Kayla, get the bird!” It sent Kayla into a guard motion.  Kayla literally jumped up into the air and startled the hawk away.  Kathryn, the hawk, and probably Kayla too, were all surprised to see that Great Pyrenees could fly! The piglet continued to eat her apple.

Kayla considered her owner as a member of the livestock community, needing to be guarded too.  During a walk in a park with Kathryn one day, Kayla sensed danger.  She became unnaturally quiet and repeatedly turned to look behind.  It turns out that they were being quietly followed by a man dressed all in black with a hooded shirt and ski mask.  Kayla’s loud barking, lunging and growling sent the man fleeing.
Kayla spent much of her life as a therapy dog too.  Trained to work with people who have physical and psychological disadvantages, Kayla helped them get better.  She visited hospitals and institutions, bringing tranquility to therapy sessions and lessening aggression and anxiety.  Kayla patiently worked with one little girl who had been traumatized by a dog attack.  With sensitivity to the girl’s feelings and quietness and gentleness, Kayla was able help the girl overcome her fear.

As she aged, Kayla’s health problems worsened.  Her hearing became impaired and Kathryn had to communicate with the dog through hand signals and other gestures.  Kayla’s old hip problem and now arthritis made it difficult to move around, but she still wanted to participate in parades and continue to help humans.  She did that till the very end of her amazing life at the ranch.
Kayla lived a full and purposeful life.  She died peacefully at home among the animals and humans she loved.  Those who knew her will miss Kayla terribly, but we are all ever so grateful for having had her in our lives.