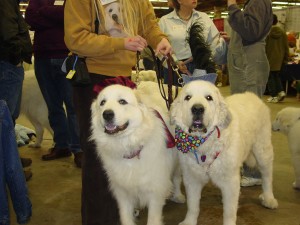 Each life is a miracle that changes the world…and leaves it a better place than it was before. Brutus did just that. It is with great sadness that I must share that Brutus Gress passed away on August 8, 2004

Brutus, a Great Pyrenees dog, was a pioneering forerunner in Animal-Assisted Therapy. Though somewhat intimidating in size, his regal demeanor and deep brown eyes conveyed his sensitive nature and strong love for people and animals.

In his role as my co-therapist, Brutus wore many hats — both literally and figuratively. He was a master healer who worked his magic with troubled youth; children wit ADHD, autism and other disorders; abused children; adults with social phobias and depression; and all kinds of people challenges.
A two-time national award winner for “distinguished service dog,” Brutus was the official “Meet and Greet” dog for the community-based volunteer program. He worked for many years in the KidsPeace Advances program at the KidsPeace Berks Campus, and helped a multitude of KidsPeace residential clients with their community service projects at his Gress Mountain Ranch home. And for all eight and a half years of his illustrious career, Brutus made the rounds visiting the sick and dying in local area hospitals.

“Dr. Brutus,” as he was so fondly called by local hospital staff, continued his work to the end — end after he was diagnosed with gastric lymphoma. He fought hard to maintain his relationships with people, struggling to do so as the last two and a half years of his life were fraught with increasing physical challenges and complex medical issues.

Brutus was a beloved family member and a majestic guardian of our livestock, our home and our family. He leaves behind his blended family of therapy animals: Kayla, also a Great Pyrenees, Muchka, a Blue Persian cat; tow pot-bellied pigs, Pearl and LeRoy; and two heartbroken humans, me and my husband, Ben. Brutus’ ashes are now at his final resting place, The Gress Mountain Ranch. —Kathryn Gress